Marco Marciano is a young and dynamic goalie coach. Armed with excellent communication skills, Marciano relies on solid experience and helpful tips received by some of the world’s best goaltenders, including the legendary Vladisla Tretiak, Francois Allaire, Gilles Gilbert, Gilles Lefebvre, Benoit Allaire and Vincent Riendeau – tips to which he can convey his undeniable passion for the sport of hockey to his young student goaltenders.

At 17 years old, Marciano started his career as a goaltender coach in the Québec Midget AAA Hockey League with the Laval-Laurentides-Lanaudières Régents. Four years later, at 21, he joined the Quebec Major Junior Hockey League as coach to eventual Stanley Cup winner Marc-André Fleury and Martin Houle while at the Cape Breton Screaming Eagles. At 24, he expanded his career with the Drummondville Voltigeurs, the Team Québec Men’s U17 and Women’s U18.

His relentless efforts would eventually pay off as the Men’s U17 won the gold medal at the U17 World Challenge in 2006, and the Women’s U18 team would went on to grab the bronze medal at the 2007 Canada Winter Games in Whitehorse. 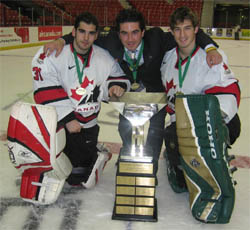 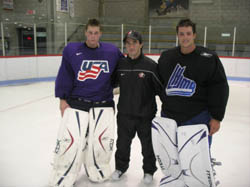 At the 2010 Olympic Winter Games, Marco will take on the duties of video coordinator for the Women’s team as it attempts to win a third consecutive Olympic Gold medal.

While at Hockey Canada, Marciano continues to offer private training courses to young and aspiring goaltenders, as well as veteran and experienced players. Marciano offers a serious and professional program supported by exceptional teaching skills. His energy, motivation, expertise and passion for hockey make him a winning formula to help goaltenders maximize their full potential and realize their dreams.